All the star kids gear up for their debut in Bollywood right from their teens. Even those who do not belong to the Tinsel town start their acting career in their early twenties. But it is altogether a different story for our very own Boman Irani. The talented actor faced the camera at the age of 42 for the first time. His journey so far can is nothing less than an inspiration for any age group.

The actor turns 58 today and we look back at his journey till date. From being a waiter and running a shop he finally made it big with ‘Lights, Camera, and Action’.

Boman had a few issues while growing up, like a speech problem, he used to lisp. He even suffered from dyslexia and was not good with academics as well. He worked as a waiter at the Taj Mahal Palace Hotel for two years. Later, because of some issues at home, he had to manage his family shop. He did that for 14 long years. Then he finally thought, that there was a lot more to explore and he ended up buying a camera.

How he bagged the role of Dr. Asthana 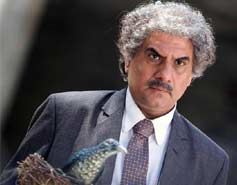 He started from Rs 25 for each click to reach a whopping 300 dollars for each. But it was a coincidence that he met choreographer Shiamak Davar who introduced him to the theatre. He did plays for many years. Vidhu Vinod Chopra spotted him during one of his plays. Then, he was persuaded by Vidhu Vinod Chopra and Rajkumar Hirani to play Dr. Asthana in ‘Munnabhai M.B.B.S.’

However, the actor has been a part of the industry for 17 years now. Apart from being an actor, he has been a professional photographer, voice-over artist and also a singer. He has some big hits in his kitty such as 3 Idiots, Main Hoon Na, No Entry, Bluffmaster, Being Cyrus, Veer-Zaara, Lakshya, Don, Khosla Ka Ghosla, Housefull Jolly LLB and Happy New Year, apart from Munnabhai series.

Boman has been applauded for all his roles. But his roles as Dr. Asthana in ‘Munnabhai M.B.B.S.’ and Viru Sahastrabuddhe aka Virus in ‘3 Idiots’ is unforgettable. The talented actor always makes sure his character looks convincing. As he is a great observer he adds a distinct feature to his character.

Being realistic while playing his roles

Therefore it is said that in ‘3 idiots’ the lisp he had was inspired by his own childhood. He has worked with the biggies in the industry from Shah Rukh Khan to Amir Khan, Sanjay Dutt, Saif Ali Khan, Akshay Kumar and Hrithik Roshan.
Boman Irani is one perfect example of a successful actor who was a complete outsider, and yet took Bollywood by storm. Hence, he proved that age is no bar. We wish him luck for his successful career and many more movies. Happy birthday Boman Irani!

Explore connection between Art and Architecture at Jeanneret house