Fukrey Returns is a comedy film directed by Mrighdeep Singh Lamba. Farhan Akhtar and Ritesh Sidhwani are the producers of this epic comedy. The movie is a sequel to the 2013 film ‘Fukrey’. However, the sequel to the movie starts from where it ended. The ‘fukras’ are back with an out and out comedy which revolves around their lives and past incidents. Therefore, ‘Bholi Punjaban’ takes the four ‘fukras’ on a revengeful rollercoaster ride.

Highlights from the movie

However, ‘Choocha’ steals the show with his entertaining performance. The comic timing of the characters is on point. Apart from Choocha’s character ‘Bholi Punjaban’ successfully manages to create her magic on screen with her ‘Lady Don’ image. 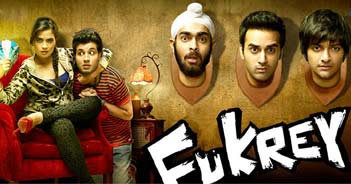 The movie stars Pulkit Samrat as Honey, Varun Sharma as Choocha, Ali Fazal as Zafar, Manjot Singh as Lali, Richa Chadda as Bholi Punjaban, Priya Anand as Priya Sharma, Vishakha Singh as Neetu Raina and Pankaj Tripathi as Pandit. ‘Fukrey Returns’ is an entertaining movie. The plot of the film is good and the actors have done justice to their roles. However, the film is a bit stretchy but is quite hilarious. Hence, the movie is very engaging and keeps the audiences hooked.

‘Lafz’ to perform live at [email protected] Brewhouse in Chandigarh