Akshay Kumar has reportedly quit the biopic ‘Mogul’. The movie is based on T-Series’ Gulshan Kumar. A few months back Tulsi Kumar said that Akshay Kumar was the perfect choice for the biopic. It is reported that the superstar had suggested a few changes in the script of the film but was ignored by director Subhash Kapoor.

What made Akshay Opt-out?

“Akshay has some concerns over the script that director Subhash Kapoor has greenlit. He requested that a few things be rewritten. But, Subhash was adamant,” mid-day quoted a source. The difference of creative opinions led the actor to change his mind and drop out of the film. 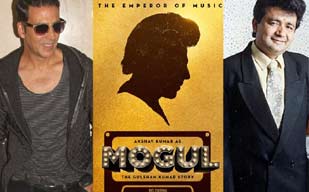 However, Mogul was set to release next year as per the first poster of the film. But now it is speculated that Akshay might give out his dates to other producers as he has a free slot on his roster.

The superstar has worked with the Mogul director Subhash Kapoor in the courtroom drama, Jolly LLB 2. Akshay featured in the movie as a struggling lawyer from Lucknow. We wonder what went wrong with the talented actor-director duo collaboration.

Earlier, Tulsi, Gulshan Kumar’s daughter told PTI that Akshay is the best-suited actor for the role. She exclaimed, “There are a lot of similarities between Akshay and my father. Akshay is a Punjabi and so are we. He is Delhi-based and my dad was also from Delhi. I think he would be able to pull off the character.”

Leaving aside Mogul, Akshay Kumar will be seen in Rajinikanth’s 2.0 which is set to release in April. Apart from this, he is currently shooting for Padman, which also stars Radhika Apte and Sonam Kapoor in the leads.

Therefore, the actor has some good projects in his kitty. We wish all gets sorted and the actor resumes working for Mogul.

Rajkummar Rao, Shraddha Kapoor to team-up for a Horror Comedy