The St. John’s Old Boys Association (SJOBA), an alumni association of St. John’s High School, Chandigarh founded in 1980 with the affiliation of both the Motor sport authorities in India i.e. MAI and FMSCI is organizing the 31st Annual Sub-Himalayan SJOBA KRISHNA ISUZU Rally from 13th to 15th, April 2018. The three day mega event was kicked off on April 13 with the scrutiny of the vehicles and Super Spectator Stage (SSS) set up at Exhibition Ground of Sector 34. 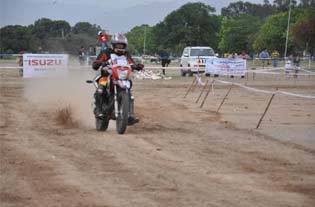 The first day witnessed an environment of adventure and enthusiasm with expert riders and drivers showcasing their motoring skills on a sand and mud filled track. The jam packed ground presented the excitement of the event among the sports enthusiasts of tricity. Nearly 39 riders on 4 wheelers and 19 motorcyclists on bikes in the extreme category of event made the viewers hold their breath. The modified vehicles on the track presented an adventurous & picturesque view. The Super Spectator Stage also assessed vehicles for their rally worthiness & a proper scrutiny of these was conducted.

SPS Ghai, COC(Clerk of Course) of Rally, while talking to media said, “Today we scrutinised the vehicles & also held a motor skills display by riders & drivers. The Sub Himalayan SJOBA rally will be flagged off from St John’s School, Sec 26 on April 14 at 6:30 am. I remember the time of 1981 when first SJOBA Motorcycle rally was held and it makes me and my team feel satisfied that motor sports is getting exposed to the amateurs in a professional way..”

Apart from the ‘Challenge Rally,’ SJOBA is also organizing the ‘Endurance Trial’ .The total prize money for the 2018 Rally is around 6.75 lakhs and trophies will also be given.

The Challenge Rally ( Extreme) will be open to jeeps/cars/bikes and will be scheduled over a period of 2 days with the participants being required to cover approximately 250 kms per day. The route will be a challenging and an adventurous one covering “axle-breaking” river beds (both dry and wet), fast tarmacs with winding hair pins, unmetalled surfaces and exhilarating hilly terrain in Haryana and Himachal Pradesh. The competitive stretches will be evenly spaced and followed by the transport sections.

Participants are likely to face 5 competitive sections on each day, which challenge the drivers concentration abilities, physical endurance and driving skills. “This event is unique in itself because it has given the people of tricity an opportunity to enjoy such an adventure which is usually accessed in hills. It is the oldest rally of its kind in North India” said Sandeep Sahni, President SJOBA. 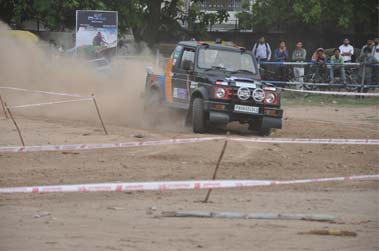 Participants in the Endurance Trial( TSD) will be able to compete in their unmodified cars making this an excellent opportunity for amateurs and for those who want to have a feel of what rallying is all about. The route for the Endurance Trial will be like that of the Rally, but the trial will be run on a TSD format.

One of the most professionally organized rallies today, the SJOBA-Sub-Himalayan Rally attracts professionals and budding rallyists from all over the country who want to take up the professional circuit. The rally has become a nursery for motor sports in North India and many rallyists from this region have honed their skills and proved their mettle in the SJOBA Rally. Hari Singh, Bitto Mann, Manik Rekhy, Samrat Yadav,Suresh Ranna and Sunny Sidhu to name a few.

Each participant is provided with excellent boarding and lodging during the entire event.

The safety of the rallying has always been a priority of SJOBA. Hence, there are FIVs (First Intervention Vehicles) and ambulances in each competitive stage with SJOBA marshals and doctors available with full medical assistance. Each Marshal on the route also carries a first aid kit with himself. 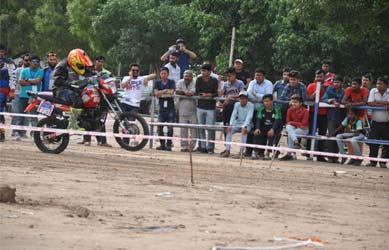 The rally enjoys the full support of the administration of Haryana, Himachal Pradesh and Chandigarh, and hence adequate arrangements are made to ensure that there is no oncoming traffic in the competitive stages. SJOBA also boasts of a near perfect wireless communication network set-up with in-house hand radio operators who ensure that any kind of help is provided immediately to the participants

Apart from the Rally, SJOBA organizes various events throughout the year like the SJOBA Winter Ball, Blood Donation Camp etc.