The wait is over for ace wrestler Bajrang Punia. He last won a bronze medal at the Senior World Championships in 2013. On November 26 he became a two-time medalist after he won silver at U-23 Senior World Championships in Poland. After his win over Azerbaijan, Iran and Turkey, Punia lost in his final bout at 17-6 to Russia’s Nachyn Kuular in the 65kg category. Apart from Punia, Vinod Kumar also managed to clinch silver in the 70kg category after he lost to USA’s Richard Lewis in the final.

Punia accepted that it was his second chance after winning a bronze in 2013. It was his first in the 65kg category at world level in the Olympic weight category. He exclaims, “Baar baar chance kisi ko nahi milta. In 2013, I was very young and inexperienced. But today, I am at my best and this is my biggest chance. Second chance mila hai toh khona nahi tha.”
Punia holds two silver medals in his name at world level tournaments. He won two silver medals in 2014 at the Commonwealth Games and at the Asian Games respectively. But the wait for gold still continues.

He said, “Champion ko sab yaad rakhte hai. I have not won a gold medal at the biggest stage so this is my chance. In 2015 world championships I wrestled bronze medal bout but lost a close match.” “2016 I got injured during the quarter-final bout and in 2017; I was so close to beating the world champ in my first bout. I was angry at myself to lose in my first round. It was my fault,” he recalled. 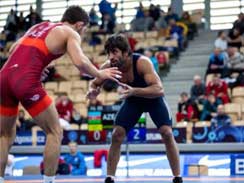 Punia talks about his bout at U-23 World Championships

Speaking about his struggle during the bout he said “The quarterfinal bout was difficult. We both were exchanging lead but the semis were something I did not expect. I had not wrestled these guys before so I did not know what their weakness is. I asked my coach about it and he said just keep moving. Do not stop wrestling.”

Bajrang Punia did as he was told and the planning helped him land into the final.

Tabu shares her experience about working with Ajay Devgan and Rohit

Unfold the story of the mouth watering BUTTER CHICKEN and its origin!!