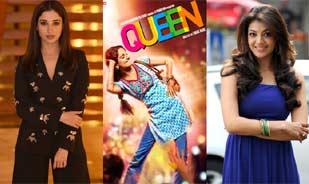 The pretty ladies spoke about their favorite hangout places, food, and the best thing about France. They even talked about how they are trying to get the language and the accent right. One of their fans asked them a question and all four of them became fierce. And the question was; If they have done something cool or out of the box in their lives?
Answering the question, Kajal Aggarwal said, “I have beaten up a guy on the street. I punched him on the face. And said, ‘Aankhen hai ki button dikhta nahi hai, theek se nahi chal sakte.’ It’s different that I got the firing of my life for indulging in such activities but I really felt for the justice of women I had to punch the guy.”
Then Manjima Mohan quipped, “I slapped a man when I was in college. I had to hear a lot from my parents because they thought he would do something. Recently, I went to an audio launch and I can’t even say what the guy did. So, I turned back and said ‘one more time you touch me and I will slap you.’ I think that is how we have been brought up to react if something wrong happens. I used to be scared initially but now I react to everything.”
Adding on to the conversation Kajal said, “It is very important as a woman to stand up for ourselves. I am not giving any feminist speech here. But if you believe in doing something that’s for your own right and standing up for yourself, there is no harm in that. You should be fearless about it.”

Turning the serious discussion into a lighter one, Tamannaah Bhatia, talked about her experience of sitting on a carousel and told that she had never done it before.
Last but not the least, Parul Yadav revealed, “The reason why I am doing this film is that I connect to the climax so much. Rani’s character dumps him in such a dignified manner. She doesn’t show him down but elevates herself, which I have done personally in my life and I can so much relate to it. For me, that is something I have done. She did not fight, she did not do anything. No revenge, just move on.”

Meanings of the different titles 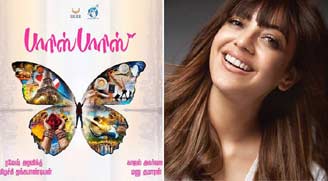 Furthermore, the actresses explained the meaning of their film titles respectively. Talking about her film’s title Kajal said that ‘Paris Paris’ is apt as her nickname in the movie is Paris and she finds herself during her solo honeymoon in Paris. Explaining the movie’s title Parul shared that her character goes through a transformation from a caterpillar to a butterfly.
Therefore, Tamannaah shares that all the four actors discuss and discover so much about the film and the character. She said, “Each one of us is giving different contributions to the film.”

Amitabh Bachchan feels delighted and grateful for being honoured at IFFI

Soha Ali Khan talks about new changes and how baby Inaaya is the Boss!