Chandigarh is all set to host the inaugural Military Literature Festival from December 7 to December 9. The Lake Club, Chandigarh will be the venue for the fest. Youth and students from Tricity will be the special focus of the festival. The young brigade will get a chance to interact with the war veterans.

The festival began with roaring Bikes 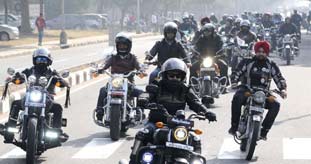 Tricity witnessed a cavalcade of 317 heavy bikes that whizzed through a 41-km long stretch on Sunday. They raised the pitch for the upcoming Military Literature Festival in Chandigarh.

During a Press Conference last month, Punjab’s Local Bodies and Tourism and Culture Minister, Navjot Singh Sidhu, unveiled the festival logo. He said that the event will prove to be a huge success.

Sidhu requested the media to support the literature festival. The motto of the festival is to spread the message of sacrifice and bravery among the masses, especially the children. However, interacting with the media, he said: “Military literature had ancient roots, with the longest poem, the Mahabharata, being all about warfare.”

Therefore, the festival will not only be a tribute to the warriors but will also ignite a spark among the young ones to join the defence forces. Hence, we are looking forward to the amazing festival.

Rajkummar Rao, Shraddha Kapoor to team-up for a Horror Comedy Gurdas Maan to perform live at Trade Fair 2018 in Chandigarh 31st Chrysanthemum Flower Show being held by the MC in Chandigarh