Apart from this, the Monastery has successfully recreated the Geshe training programme. Menri in India is the only Monastery other than Triten Norbutse Monastery in Nepal to host the Geshe programs of the Bon lineage. The Monastery in Solan is also home to as many as 200 monks.

How to get there? 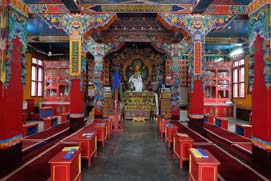 The Menri Monastery in Dolanji (Solan) is located on the Oachghat-Narag Road. It’s a road from Oachhaghat which is off the main highway. The 9 km long bumpy road leads you to the Monastery. You can take your vehicle straight to the Monastery compound. 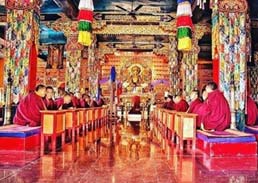 It is a different sight up there. A few shops around the Monastery and very few people understood Hindi. A young monk understood our curiosity and took us to the Monastery. There is a treasure accretion of religion and oldest art, accomplished in a multi-colored palette of pigment and dyes. The Bon Monastery is nothing less than a beautiful experience.

It is not just a Monastery but the headquarters of Tibet’s oldest religion, Bon.The religion is even much older than Buddhism. His Holiness Menri Trizin, Lungtok Tenpai Nyima is the spiritual chief looking after the Monastery. 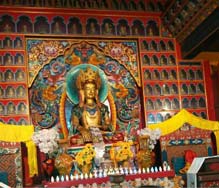 Furthermore, the young monk took us inside. There were golden sculptures and an idol of Tonpa Shenrab, the founder of Bon glowing in the colorful lights. Rainbow colored murals enhance the decorations of the temple hall. Thangka paintings cover the ceiling and the pillars. The roofs of the monastery are embellished with rich golden and colorful decorations.

There were all sorts of offerings at the altar like chocolates, fruits, biscuits, incense sticks etc. The carvings, the waxwork, and the huge ancient scriptures kept there were very intriguing. This led me to ask the young monk that in what way the Bon culture is different from Buddhism? He said, “Bon, was founded by Tonpa Shenrab in Olmo Lungring. It is a place in Tibet now. It is many years older than Buddhism.”

Meanwhile, it was the lunch hour for the monks. They all gathered around the desks in the hall.

On the left side of the Monastery is the residence of Menri Trizin. “The Bon practitioners hold a philosophy of leading a simple life. They are mostly vegetarian and stay away from lies,” the monk said.

Difference between Buddhism and Bon religion 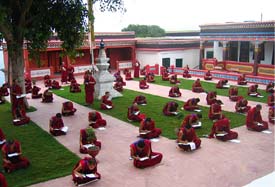 Talking about some basic some differences between the two religions he said, “The Bonpas wear deep maroon robes, unlike Buddhist monks who dwell in yellow- maroon robes.” “One of the interesting differences is that there is a rule for the direction unlike in Buddhism we walk clockwise; here we have to go anti-clockwise,” the monk exclaimed.
Furthermore, he threw some light on the history of the Monastery. He said, “Nyame Sherab founded the Monastery in 1405 AD. In 1969, the work on re-establishing the Menri Monastery in exile, in Solan began.”
Back at the Monastery, we met many Russians. They were keen on studying the ancient Tibet Tantra, Sutra, Dzogchen, poetry, herbal medicine, and Sanskrit. Therefore, these scripts are the backbone of their language. In 1978, the Dalai Lama acknowledged the Bon religion as a school after he visited the Bon monastery.

Places to explore near the Monastery 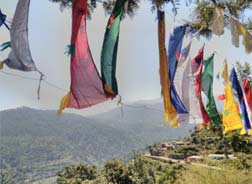 Apart from the Menri Monastery, there is Renla Menling Monastery just across the river. Therefore, it is also named as ‘Land of Precious Medicine’. Hence, after visiting the Bon Monastery we realized that Tibet is not just about Buddhism but it is also home to the oldest religion, Bon.

Top 10 Beautiful Destinations To Must Visit In Chandigarh 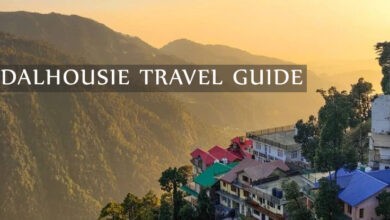 Dalhousie Travel Guide – How to Reach Dalhousie from Chandigarh?